Flexible and efficient production is crucial if manufacturing companies in the Netherlands are to remain competitive. New technologies, such as robots and augmented reality (AR), support employees in working quickly and faultlessly. An effective division of tasks and cooperation between the human operator and robot is crucial in this respect. We have software, knowledge and tools to provide assistance to operators.

Within the EU-project Horse TNO has developed new knowledge and software tools (the TNO step scheduler) for effective cooperation between people, robots and digital support on the production floor.

If you are interested in a demonstration, the Horse TNO competence centre “Guided Manufacturing Lab” in the Fieldlab RoboHouse can show you the following:

Put to the test by TRI

The TNO AR demonstrator and the Framework have been tested and evaluated at Thomas Regout International in Maastricht. TRI develops and produces high-quality telescopic slides and linear guides. Several years ago, TRI made a conscious choice to keep their production in the Netherlands and is currently in full transition to a flexible factory of the future. Various robot applications have been introduced for handling of semi-finished products. Augmented reality as instructional support has been tested in the assembly of complex tools for the production machines. (photo 1).

Due to the large variety of products, many tool configurations are needed. It now takes months to train new operators. And inexperienced employees are more likely to misorient parts. In the test, inexperienced employees were instructed step-by-step by means of projected work instructions (text, annotations and images) on the workstation, the product itself and on the bins with parts. The evaluation showed that inexperienced employees were able to put together the tooling without additional explanation, and without errors in the end-product. TRI expects that with this system the learning time will be shortened from months to a matter of weeks. 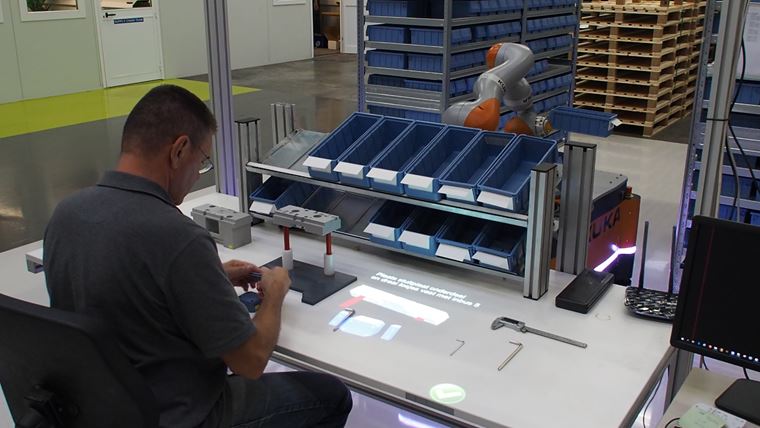 What TNO can do for your processes

Would you like to know more about what these technologies can do for your process? The following is possible:

Testing and evaluation of developed demonstrator of human robot cooperation, augmented reality and control from the Horse software Framework in the assembly of complex tools at Thomas Regout International (TRI).

What’s the impact of technological innovations? Smart Response provides insight: from changes in ecosystems to the impact on new business models.

Read more
over Smart response: measuring the impact of innovations

To keep control, we need a strong and secure European data infrastructure that will help manufacturing companies to increase their profitability and productivity. Discover how TNO partners are accelerating their digital transformation with 'digital connectors', field labs and training.

In digital twinning, we bring together data, models, and the business process, and create a digital life cycle alongside the physical one.
Read more
over Digital Twinning