Rule of law and investigation

Thema:
Rule of law and investigation

The fight against crime is becoming more effective through the application of innovative methods and resources. Scientists provide more understanding (observation) and insight (analysis) into phenomena, networks, and behaviour. TNO translates this knowledge into concrete tools and methods for professionals in the criminal justice chain. This contributes to a safe Netherlands.

The fight against crime is increasingly taking place as intelligence-led policing and is developing in the direction of predictive policing. This means that action, management, and prediction are increasingly based on a better understanding of criminal situations and how they are likely to develop.

By predicting crime more effectively, it can be better prevented, early intervention can take place, networks can be dismantled, and modus operandi terminated.

That’s why TNO is researching advanced analysis and modelling technologies with the aim of gaining better insight into criminal phenomena, networks, and modus operandi. However, we also look into the specific individual behaviour of suspects, victims, and witnesses, for example, so that we can offer professionals tools to better interpret and possibly positively influence that behaviour.

Collaboration between different agencies within and outside the criminal justice chain is essential in an integrated approach to crime. But in practice, collaboration often turns out to be more difficult than previously thought. That's why TNO is also looking at the organisational and psychological aspects of collaboration in heterogeneous teams.

In addition, we contribute to the ability to measure and assess the effects of interventions in their context. By working together, our scientists and the professionals in the field learn which approach works best in which situation.

For example, between September 2019 and March 2020, TNO prepared a System Analysis Seaports on crime in seaports. This was commissioned by the Port Triangle Zeeland West Brabant. We worked with the Taskforce-RIEC Brabant-Zeeland and the organisations participating in the Port Triangle, namely the municipalities of Borsele, Moerdijk, Terneuzen, and Vlissingen, the Public Prosecutor's Office, the Police, Customs, the Royal Netherlands Marechaussee, and the port companies North Sea Port and Port of Moerdijk.

The police are increasingly collaborating with the general public in the field of security and public order. The general public have more than just eyes and ears, and increasingly they want to be involved in the investigation process. For example, joining the search for missing persons or searching for stolen goods on the Internet.

Our research therefore focuses on the question of when and how the Police and the Public Prosecutor’s Office can best collaborate with the public, and when not to. And what tools we can give to the public to do so.

Criminals do their best to hide their ‘work’ from the view of others as much as possible. In order to be able to recognise, follow for a long time or possibly disrupt the activities of criminals, there’s a constant need for innovative and often advanced instruments.

Criminals are increasingly using technological tools themselves while at the same time trying to make the work of the authorities impossible. Together with our clients, we’re working on the transition to smart surveillance by researching new advanced technologies and proof-of-concepts in this area. Together with the industry, we're developing them into new products and services.

National security in the Netherlands: 5 themes in focus

TNO is an expert in security research and brings together technology and innovation to ensure a safe and secure Netherlands.

Read more
over National security in the Netherlands: 5 themes in focus

Handbook to help with detection

Everyone can live a contribution to detection. But how can police and citizen (organisations) work together to ensure our safety and justice? The new TNO handbook 'First Aid for Investigation - Handbook for Citizen Detectives' offers help.

Read more
over Handbook to help with detection 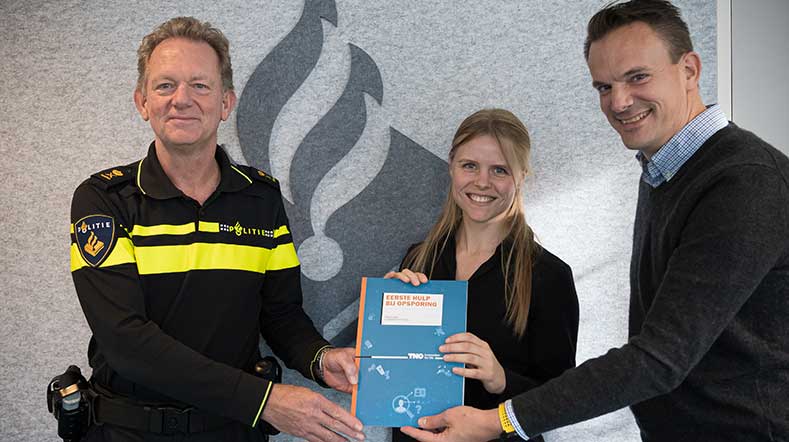 At TNO, we contribute to international security research into counterterrorism and a safe Netherlands. Discover how we do this.

TNO strengthens processes and supply chains, thus helping to boost the resilience of the Netherlands against cyber threats. Reduce cyber risks with the help of our white paper.