Generating energy from sunlight is essential for reducing CO2 emissions. But it takes a lot of space to install large numbers of solar panels on land. What if you could use existing space in the built environment? We’re developing opportunities for innovative solar panels in windows and on façades and roofs.

If you can incorporate solar panels into windows, it opens up a world of possibilities. However, you have to make sure the window remains transparent and that’s a challenge. The right balance is important here. We found the solution in solar windows: a slightly tinted window pane that generates a lot of solar energy but also lets sunlight through (see image). For solar windows, we use thin-film solar cells, produced mainly from the material perovskite. The goal is to create glass that lets in at least 20% of sunlight, while converting at least 10% into solar power. In this way, the windows can help make buildings energy-neutral, for example.

We’ve created a working prototype glass window that generates solar energy. Together with companies in the construction and glass industries, we’re developing this further so that it can be marketed. The prototype is 10 by 10 centimetres, with 5% efficiency. If we remove 50% of the material, 40% of the yield remains. Within 2 years, we want to improve the 5% efficiency rate to 10%, without compromising on aesthetics or transparency.

As well as windows, we also want to make façades suitable for energy generation. We’re talking here about a surface area of some 60 square kilometres in the Netherlands, which together could generate 6 gigawatt peak of power. We’re working with construction companies and manufacturers on a revolutionary product that’s promising for the national and international markets.

Over the last few years, in the Dutch Solar Design project, we’ve been working with partners to develop technology that makes this possible. In doing so, we pay attention to aesthetics and sustainability. For example, unimaginative façades of old blocks of flats can be transformed into attractive walls that generate energy. Within the foreseeable future, we want solar panels that generate energy to cost the same as the most common materials used in construction. This is how we’ll accelerate the creation of energy-neutral houses and other buildings.

Examples of solar cells on façades

The new generation of solar panels is so flexible that you have endless possibilities in terms of size, shape, and colour pattern. Situations where solar panels have been installed on façades include: Benefits of the latest solar panels

The variety of sizes, shapes, colours, and transparency of solar panels we’re working on may reduce the yield per panel. But on the plus side, many more surfaces in the built environment are suddenly able to generate solar energy. This can significantly boost the total amount of energy generated.

The Netherlands has around 800 square kilometres of roof surface available for solar panels. Only 5% of all roofs are currently being used for this purpose, although we’re going to be using more and more electricity in our homes and vehicles. So there’s still plenty of potential.

Half of the available roofs are commercial or agricultural. But not all roofs are suitable. Standard solar panels are also often too heavy for the load-bearing capacity of a roof, or the panels are not desirable from an aesthetic point of view. We’re therefore working on solutions for lighter, more attractive, cheaper, and simpler structures.

We develop these innovations together with companies. This ‘mass customization’ ensures that solar cells can be quickly, flexibly, and affordably incorporated into surfaces and objects. From roofs and façades to cars. We’ve built a research production line for this purpose. It’s a model for a new generation of factories that will produce flexible semi-finished solar products.

Variations in shape, size, and colour are also important for the wider acceptance of solar panels. And to ensure that using solar power doesn’t undermine an architect’s creative freedom. Moreover, these innovative solutions create new market combinations and business activities. There are opportunities for construction companies, suppliers, machine manufacturers, and installation engineers.

A new generation of solar panels processed in the façade

Brief explanation of the importance of new technology for solar cells on façade at BAM’s head office.

It’s common practice to convert the solar energy generated through roofs, windows, and façades into electricity. But another possibility is to use solar collectors that convert sunlight into heat. In time, solar energy could provide about a quarter of the heat needed in the Netherlands. However, seasonal storage is needed to store heat generated during summer in heat batteries for use in winter.

We work together with market parties on innovations in photovoltaic-thermal systems (PV-T systems). To make them better and more affordable, among other things. PV-T systems on roofs, combined with a heat pump, can make part of the built environment energy-neutral.

Solar heat can provide 10% of total heat demand in the built environment, utilities, agriculture, and industry. We’ve done research on the use of solar energy as a heat source. You can read about the problem areas and specific recommendations for making the best use of solar heat in an exploratory study (in Dutch) (pdf).

Previous research (pdf)shows that PV-T modules should harmonise optically with a building in terms of colour pattern and size. Making the built environment energy-neutral will then become a good market opportunity for PV-T. We’ve demonstrated this in aesthetic façades with solar modules and with a heat-absorbing paint on façade elements.

We’ve designed 3 PV-T systems together with Eindhoven University of Technology and a large number of companies. We did this work at our SolarBEAT research site. The systems were then built and tested in simulations in a lab environment. We use the results to calculate the business case for PV-T systems. 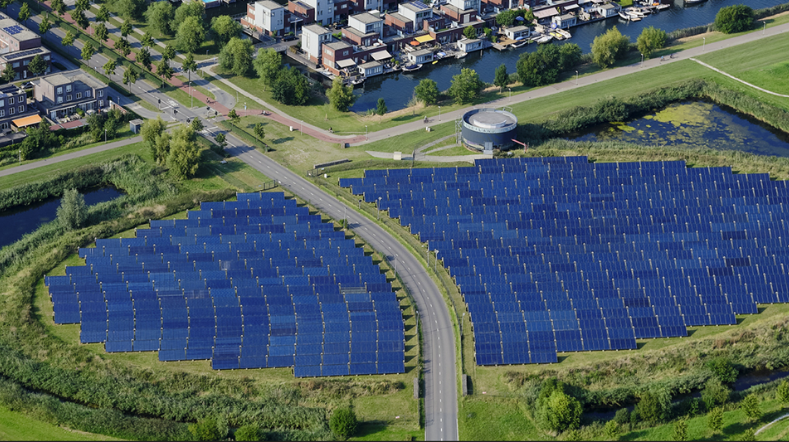 A ’smart window’ developed by TNO and partners in the Interreg project Sunovate, performs successfully in real world conditions according to preliminary pilot results. The window is designed to automatically switch between blocking heat from the sun and letting it pass. It is optimized to reduce energy consumption in moderate climates with cold winters and warm summers, such as in the Netherlands.
Read more
over Smart window with large energy savings potential shows promising results during first pilot field test